"Snick is (Usually) Good... Until you discover the monster behind those beady, black eyes."
— Toppinbot.

Snick the Porcupine (simply referred to as Snick) is a character who appears in the Pizza Tower SAGE 2019 Demo.

Snick is a sharp purple porcupine with two small beady eyes, a snout reminiscent of a hedgehog, and a red and white pair of sneakers matching his cap. He has white-gloved arms that stay mostly hidden within his spikes.

Snick is a 1990's animal mascot akin to Sonic the Hedgehog, though is described as much less popular. Despite this, he still holds his own expo in the form of the Snick Amateur Game Expo, abbreviated to SAGE, seen in his debut demo, a blatant reference to the Sonic Amateur Game Expo of which the SAGE 2019 Demo was a part of.

Unlike Peppino, Snick finishes levels by touching a sign, spinning it around to reveal a picture of himself before striking a victory pose and making a peace sign with his right hand, a reference to how Sonic would finish the levels in his games.

Snick also has an evil doppelgänger of sorts known as Snick.exe, an obvious reference to the popular Sonic creepypasta, Sonic.exe. This being looks identical to Snick, though his eyes bleed and his posture is more upright.

When playing as Snick, the player automatically builds speed when walking, but pressing the opposite direction while dashing nullifies it. Most of his other abilities are near identical to Peppino's.

Whenever Snick is damaged, he drops all Pizza Points collected, similarly to how rings work in the Sonic games. If Snick is damaged with no points, he falls off-screen and the level must be restarted.

Snick cannot collect Toppins or Pizza Coins, disallowing him the use of shotguns.

Snick is unlocked as a playable character in the SAGE 2019 Demo when the player finishes Snick's Challenge for the first time. A block will spawn in the Cowboy Task room that, when hit from below, will switch the player's character from Peppino to Snick and vice versa.

Pressing the jump button while on the ground will initiate a jump, with the time the button is held determining how high the jump will go.

Jumping on top of enemies will stun them, disabling any offensive measure they have. Snick can bounce higher off of an enemy by holding the jump button when landing on them.

Snick automatically gains momentum while walking, slowly increasing in Mach speed the longer he walks. The effects of each Mach speed is identical to Peppino's, so more information about each one can be found on his article. Unlike Peppino, however, trying to drift in any Mach will just slow Snick to a halt.

Pressing the dash button stop Snick in place, commencing a peelout for however long the button is held. During a peelout, Snick gains Mach speed without having to move before launching forward when it's done. A peelout cannot be done right next to a wall.

Pressing down while dashing at Mach 2 or higher will cause Snick to slide. This ability is next to useless, as Snick's hitbox is already low enough to fit through one-block gaps, meaning that its only real uses are to dash forward at a constant rate or quickly dive off of ledges.

A quirk to note involving Snick's height is that even though his hitbox is always low enough to fit through one-block gaps, he will break breakable blocks, notably small ones, with a height of two blocks identically to Peppino. Sliding, however, will break Breakable Blocks with a height of one block.

Pressing down while dashing in the air at Mach 2 or higher will cause Snick to dive downwards at a diagonal angle with the same properties as if we were dashing.

Pressing up while dashing at Mach 3 or higher will cause Snick to go into his electric form, a reference to Super Sonic from the Sonic games, slowly inching across the floor for however long the up button is held. When it is let go, Snick will launch upward at a constant rate until he hits a ceiling, breaking most breakable blocks in his way aside from Metal Blocks and defeating any enemies on contact.

If the dash button is pressed during a Super Jump, it will cancel, bursting Snick forward.

Pressing down during a jump at Mach 1 will initiate a body slam, which can break most breakable blocks (Metal Blocks can be broken by body slamming at a higher height) and knock all enemies on-screen upward. It also has the power to defeat most enemies, and is most likely the best option for most close-quarters combat.

Pressing the taunt button will cause Snick to strike a variety of poses with props. This stops him for a bit while still maintaining Mach speed, and can be strategically used to avoid certain hazards like Pizza Cutters without losing any speed.

Quickly after a combo of 3 or more is made by defeating multiple enemies in a row, taunting will become a screen-clearing move, defeating any enemies on-screen and continuing the combo.

Along with his basic moveset, Snick has the ability to transform in a variety of ways for different purposes.

Unlike Peppino, Snick cannot use Stairs to enter his Ball form, meaning that the only way for him to become Ball Snick is by being kicked by a Pepperoni Goblin.

Snick curls himself up and quickly rolls until he hits a wall. He is invincible during this state, defeating any enemies and destroying small breakable blocks on contact.

To become Robot Snick, the player must be hit by a Pizzard's lightning bolt, as Snick cannot pull out the sword from the stone.

Snick becomes heavy and slow, but invulnerable with the power to take out enemies by simply walking into them or jumping on them. Due to his newfound weight, Snick slips uncontrollably on contact with Stairs, not stopping until he hits a wall, breaking his suit and ending the transformation.

To become Bomb Snick, the player must pick up a bomb from a Pizza Box Goblin or Enemy Spawner.

Snick becomes a ticking timebomb, continuously running forward, turning at walls, with only the ability to jump. He will eventually explode on his own, but explodes instantly on contact with a Bomb Block, which can only be destroyed with this form. This transformation is instantly lost on contact with Boiling Sauce.

To become Firefur Snick, the player must touch Boiling Sauce.

Snick will jump up high before having to recover after landing. He can defeat enemies and destroy most breakable blocks from below on contact during this form.

Snick pulling the sleigh for Peppino and his allies.

Snick commemorating his birthday with his friends.

Snick after bonking into a wall at Mach 3 or higher.

Electric Snick before he super jumps. 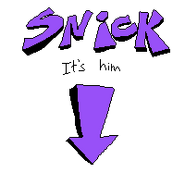