Before developing Pizza Tower, Pizza Tower Guy has worked on many other games before. The genre, the gameplay, and even the style of sprites varies in each one of them.

Weenie Cop, also known as Weiners Don't Use Drugs, is an action-platformer game, starring Peter and Mac as main protagonists.

The visual art style doesn't look very different from Pizza Tower, besides it using colored outlines, not using a Game Boy Color Wario Land 2's color palette, animations being slower and sprites themselves being smaller, due the game being 4:3, instead of 16:9.

The gameplay was mostly inspired by Jazz Jackrabbit games. Pete and Mac's moveset are the same, with their differences only being aesthetic.

The moveset is mostly based on attacking, shooting and dashing. It's also possible to buy upgrades from the shopkeeper to upgrade the attack moves paying with toes and foot collectibles. The player can also collect hot peppers to charge the super move, depending on which attack the player will use, Peter or Mac will either shoot with a giant bullet that shatters into smaller ones or perform a big series of punches for a bit. It's also possible to perform wall jump by jumping into the wall then pressing the jump button again to jump away from it.

The enemies on first two levels are the variations of french fries, wearing black jackets and having different types of sauce as their hair. By modifying the game, it's also possible to see other type of enemies - burgers wearing black bandanas, like steriotypical burglars.

There are only two bosses - tutorial boss, which doesn't attack and can be defeated in one hit, and fryboys boss, being able to throw bombs and summon french fries enemies. The way to defeat him was to deflect the bomb with melee attacks, so it would go back at him, causing him to take damage. Also, he would be able to sometimes deflect the bomb back at the player. Though, the boss fight doesn't work as intended, as deflecting bombs back at the boss doesn't do anything, which makes the fight impossible.

During development of the game, Weenie Cop did not have a original soundtrack. Instead, it used tracks, taken from various sources as just placeholders. Though, due to a few bugs, they don't play in the game itself.

One of Burger enemies' idle animation.

All sprites. (this gif might appear as an empty box) 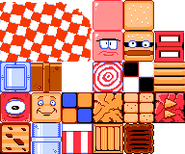 Early unused tileset. Some of blocks here do appear in game.

Some of the early concept arts.

Concepts of main mechanics of game.

The last bunch of concept arts. 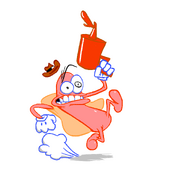 Promotional art for the game.

The visual style, unlike Pizza Tower, is more grim and scary, with Peppino being more realistic.

The gameplay was supposed to be side-scroller with need to find weapons to kill enemies. Only one video of gameplay exists [2], showcasing one of the weapons - buzz saw, so it's hard to tell how the game would actually play like.

Peppino's sprite with a chainsaw. 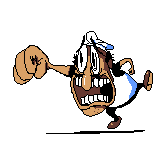 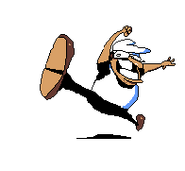 Peppino possibly going berserk while being covered in blood sauce. 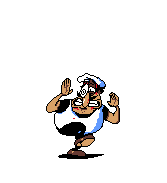 Peppino being a bit scared. 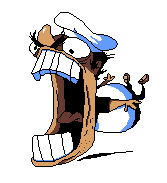 Peppino looking at cheese with confusion.

Peppino looking back to check if nothing is following him. 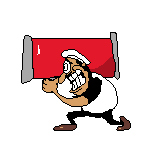 A pretty rough sprite with Peppino holding a cannon. 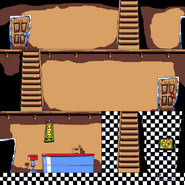 Concept of the map for the game.

Pizza Horror is a RPG-like game, made in RPG Maker and inspired by Earthbound.

The visual style here is pretty much the same as for Pizza Massacre.

The gameplay was supposed to be pretty similar to Earthbound, except with having more interactions in overworld map and having 2D sections, similar to LISA, in-between.

Peppino's shocked sprite looking from back.

Peppino's being sad sprite. Possibly could be used in dialogue box.

Peppino's animation in a manual of the game, which has the early name "Pizza Nightmare".

All the Peppino animations that were made. 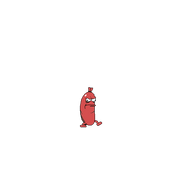 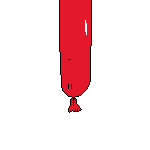 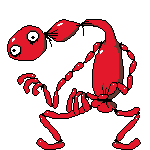 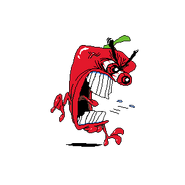 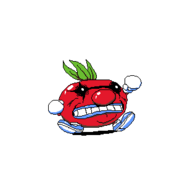 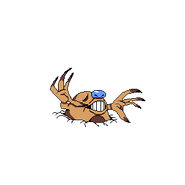 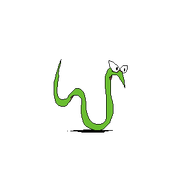 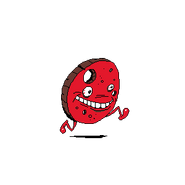 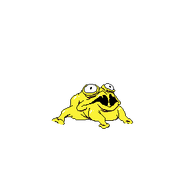 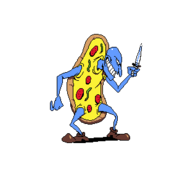 Some of the props from the game.

Monkey game is an arcade-like game about monkeys stealing treasures and escaping from the hunters.

The visual art style is heavily different from any other PTG's games, being more simplistic.

Since not a single footage of the game was provided, the only way to find out about how the game was supposed to be played by PTG's description of it:

brandon, rambo, the gun guy and the dog

and they would all have their own behavior"
— Pizza Tower Guy.

Ape on a turtle sprite.

One of Monkey's sprites.

Ape on a lion sprite.

Clown game is a RPG Maker game that was developped during the development of Pizza Tower. Not much known about it, since there's only one video of test build [4] exists.

As seen from the gameplay video, it possibly could be a puzzle involving changing characters, each having their different abilities, but that is not confirmed.