BeachandForestv1
Pickle is an enemy in Pizza Tower based on the Roper enemy from Memoirs of Magic.

Pickle looks very similar to the Roper enemy from Memoirs of Magic but it looks more like a dill pickle compared to the enemy's original design and has a much more cartoony design, with its eye being white with a black pupil instead of yellow with a red pupil and it having only one pair of arms that are retractable and are less tentacle-like and more human-like.

Pickle teleports towards the player and wiggles its arms with electric effects surrounding it when spotting them, damaging the player if they are hit by it, forcing them to move away to avoid it. When the Heat Meter is at a high enough level, Pickle will duplicate itself whenever it teleports.

Pickle has an above-average amount of health, and will be defeated after three weak attacks. 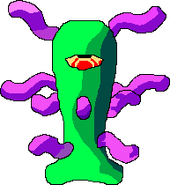 An image of the original enemy from Memoirs of Magic.
Community content is available under CC-BY-SA unless otherwise noted.
Advertisement