The Wasteyard
Oregano Desert is the sixth level in Pizza Tower, and the first level of the Weird West.

It's a scorching desert with massive pizzas in the sky and an underground cave system. A UFO is found parked at its end.

Pizza Tower of the West[]

The main room, includes some Tribe Cheeses. A secret just at the left of the gate that is pretty easy to miss, but the player needs to do either super jump or climb the wall to get there, another secret where there are some toppings in a suspicious 1-tile shorter hole, and some more bonus points but again the player needs to do a Super Jump.

The 2nd room. Includes some Goblins, a Pencer and some more Tribe Cheese.

The 3rd room, there is a Pizzamart, a Tribe Cheese, a Flying Anchovy and a Cheeseslime.

Do You Have Pizza?[]

The 1st room in the Pizzamart. There are sadly no shotguns to buy, a Big Pizza Block in a hole on the ceiling, another 2 Tribe Cheeses, and some more blocks to destroy.

A sort of storage room, accessed by a box of pizzas in "Do You Have Pizza?". Has the Key, a Squire, and some toppings.

Takes place in a closed area, has a Kentucky Kenny spawner, some more Tribe Cheeses, 2 Free Milk stands and some TNT blocks, though the player should look for a secret in the bottom of the room, because there is a fake wall that the player can destroy.

The 1st or 2nd secret to find linked in the 1st room of the level.

Congratulations On Finding This[]

It's a treasure room.

Background #1. A desert with giant pizzas in the background.

Background #1 (Night version and unused). A version of the desert background at night.

Background #1 (Escape and Unused) A version of the desert with a dark sky, pizzas with eyes and mouths in the background with a meteor falling. 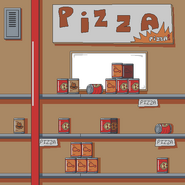 Pizzamart background, showing various cans of chicken and pizza on the shelves. 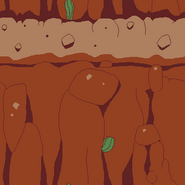 Background #2. A desert ravine with cacti growing on the walls.

Background #3. A dark desert cave with stalagmites and stalactites. 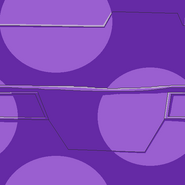 Background #4. The slightly dark interior of the crashed UFO.

Background #5. The top of the crashed UFO, showing the desert out of the glass dome.