He first appears in Fun Farm and can be used as a transformation that can break Mort cubes.

Mort is a chicken with white feathers, a long neck and a brown head with large, round eyes. His most defining feature is his comb, which is uniquely shaped and has a hand-like leaf-shaped part at the top. Mort can ball this comb into a fist to punch enemies, giving him a way to attack foes. Mort, like any other chicken, is mindless and doesn't really care too much about what goes on around him, often looking very bored and uninterested. However, despite this, he is surprisingly brave and is able to fend for himself even though most others of his kind wouldn't.

Mort flying forwards after being thrown.

Mort after getting knocked off Peppino's head. 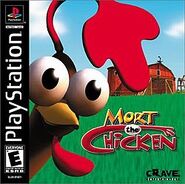 The cover of Mort's game.

Toppinbot's description of Mort on the Pizza Tower Discord.
Community content is available under CC-BY-SA unless otherwise noted.
Advertisement