This is a list of the secondary characters that have been part of the Pizza Tower universe with a minor role in the story.

"Noisette is Beyond Annoying. It takes a noisier noise than The Noise's noise to annoy The Noise."
— Toppinbot.

Noisette is The Noise's girlfriend. She mostly resembles The Noise's physical appearance, but wears a pink overall-like dress with a red undershirt and shoes of the same color. She also wears a pink mask adorned with bunny-like ears from which a couple of strands of hair protrude.

She has appeared in one of The Noise's taunts, one of the Peppino & Noise comics, in Saloon playing a card game with Pizzaface, and in Kids' Party on a poster. She is planned to run the tower's gift shop, where players can buy alt colors, tips and tricks (such as how to do the harder moves), OST CDs (including unused tracks), and perhaps more.

Noisette was going to be disguised as a character Mr.Incognito in a conceptualized comic about Peppino and Gustavo in the desert. Mr.Incognito would antagonize them. He wears a fedora, a trench coat, gloves, and shoes.

Noisette hugging The Noise, while he tries to escape.

Noisette's first iteration, in a Peppino & Noise comic. She is significantly more aggresive and angry.

Toppinbot's Description of Noisette on the Pizza Tower Discord. 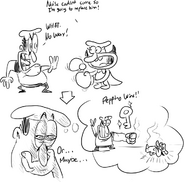 Joke art of Noisette standing in for Noise's boss fight 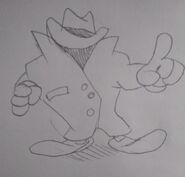 Mr. Incognito, who was gonna be revealed as Noisette in an unfinished comic.

Peppino, Noisette and Noise on a poster in Kids' Party.

Snick's Gang is a group of characters made of Snick and his friends. During Snick's development, PTG made some sprites showing what the rest of Sonic the Hedgehog's cast would look like in Snick's style. He then proceeded to make an image showing Snick having a birthday party with the characters he made, but then said the image was not canonical to the Pizza Tower lore. It is composed following members: Snick, Tail, Boots, Shadow Snick, Dr. Bad Breakfast, Aluminium Snick, Snick.exe and finally a unnamed pink porcupine with a bow.

Tail (made to represent Tails, Sonic's best friend and sidekick in the games).

Boots (made to represent Knuckles, Sonic's old friend and rival).

Shadow Snick (made to represent Shadow, Sonic's arch-rival). PTG said that his catchphrases are "im the coolest" and "im the greatest living thing my duderino" (the latter being a reference to Shadow's title as "the ultimate life form".)

A unnamed pink porcupine, possibly Snick's girlfriend (made to represent Amy Rose, which has Sonic as a love interest).

The image showing Snick's birthday, along with the rest of the gang.

Dougie Jones is a Pizzard who first appears as Noise's assistant in the ??? Comics, and so far is his only appearance. He doesn't seem to have any design differences from any other Pizzards, but has been distinguished as his own character despite this.

Dougie holding a bowl of chips, and holding one thumbs up.

Dougie Jones making tequila for Noise. (Which incidentally, Noise spits it out due to it "tasting like pizza".) 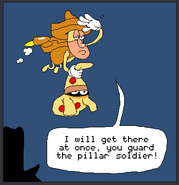 Dougie being brought along with Noise in pursuit of "A guy who moves really fast", possible mentioning peppino, or snick.

A sketch PTG made, trying to help fans modding Dougie as a playable character into the game come up with moveset ideas.

John E. Cheese is a now deceased farmer Cheeseslime who formerly owned Fun Farm. He mostly resembles others of his species, with the difference that he is slightly bigger and wears a pair of circular glasses, a straw hat, and a pair of black shoes on his retractable legs.

He has been revealed to be The Vigilante's grandfather and seems to be related to lore in some way. His ghost will appear in The Wasteyard. Various pictures of him can be seen inside the barn sections of the Fun Farm. He also appears on a milk carton in the Freezer, and on a box in Kids' Party.

A picture of John running while holding a gun. Whoever took this photo probably didn't live much longer afterwards.

A picture of John holding a pitchfork.

A sketch of John E. Cheese in his ghost form, from the Pizza Tower Defense sketches.

These gnomes are the gnomes that the player has to deliver pizza to in the Forest level. They currently do not have names.

A female gnome, has red cheeks, a white cooking apron and a red undershirt.

She appears on a box in Kids' Party.

The Granny after having the pizza being delivered to her, offering a pie to Peppino. 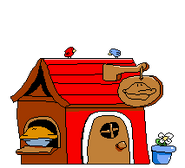 Wears what seems to be a raccoon hat, but when successfully delivering him his pizza, it is shown that this hat is actually a live raccoon. He also wears a green shirt and has a brown mustache.

The Hunter after having the pizza delivered to him, giving Peppino a thumbs up while his raccoon uncurls and cheers happily. 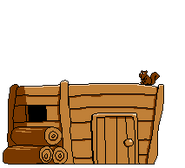 Has a similar outfit to Peppino but he has a yellow apron, is bald, has a big nose and a blonde mustache.

The Blacksmith after having the pizza delivered, raising his hammer with joy. 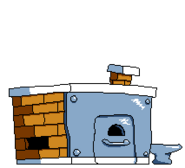 Has an long nose, wears an white, purple jester hat & outfit and has a mustache. He has Noise Bombs in a crate outside his house.

The Jester after having the pizza delivered, overly happy that he got his pizza. 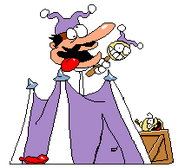 The Jester's house, with a Noise bomb.

Has a white beard and blue wizard outfit.

The Wizard after the pizza is delivered to him, where he floats in the air with joy. 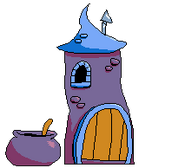 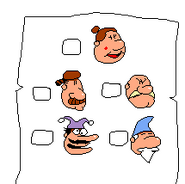 A checklist with all gnomes on it. 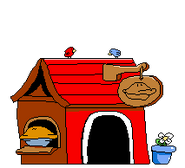 The Granny's house being open. 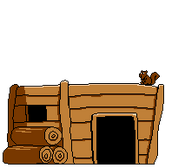 The Hunter's house being open. 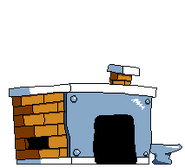 The Blacksmith's house being open. 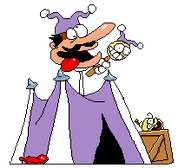 The Jester's house being open. 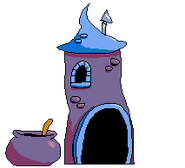 The Wizard's house being open.

The Doise is The Noise's recolor, originally created by Robby1scool in his video. His current role in game is unknown, but it may be replacement for The Noise in his boss fight while playing as him. 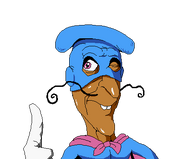 Original image The Doise came from.

Note: Lore may be outdated.[]

Pizzamancer is a character that has only appeared in concept art of the game and mentioned by PTG as part of the lore. He looks like Pizzaface, except his nose is a tomato instead of a mushroom. He has a regular mouth, and differing from Pizzaface, Pizzamancer has limbs; white hands and feet. He also wears a Pizzard's hat and a big cape.

There isn't much information known about Pizzamancer, except that he cursed Peppino's ancestor and his whole family for disrespecting pizza. The curse was that they wouldn't be able to make pizza in peace anymore. But even with that, the ancestor still defeated him. It is also mentioned that he was the original creator of the Pizza Tower, as well as the possible original owner of the Cheese Dragon.

He died after several years when the war ended, which lead to Pizzaface to conquer the Tower afterwards, becoming its new owner. It is speculated that Pizzaface came to life thanks to Pizzamancer's powers.

Pizzamancer along with early design of Cheese Dragon.

Santa Clause is a character that appears in the Peppino's Xmas Break demo as a one-off character.

He first appears at the beginning of the demo, where he carries Peppino off the title screen in his sleigh and flies him toward the Strongcold. He later appears in the Strongcold level in the second to last room, but once Peppino enters the room, it's revealed that it wasn't actually Santa, it was actually The Noise, who then proceeds to pull out a Noise Bomb and a boss battle commences. Santa himself doesn't appear anywhere else in the demo but his sleigh appears at the end of the demo where Peppino and his friends use it to run away from the tower before it explodes.

Santa on his sleigh.

Santa's Sleigh without Santa, appearing when Santa hops out of the sleigh to reveal himself as the Noise.

Mr. Orange is the Noise's twin brother. His appearance is almost identical to the Noise, except his costume is orange and his cape is the same yellow the Noise wears. Mr. Orange was planned to be an alternate boss when playing as The Noise in single player and co-op. He has an Australian accent, as he was separated at birth.

Snippets of Mr.Orange in other sketches by ptg, depitcting him with some unique characteristics

Peshino, also known as Animatronic Peppino in the Kids' Party level. He was originally a transformation very early in development, before being thought to be reused as a life system in the Kids Party level much later in development. Eventually this idea was scrapped and Peshino was turned back into a transformation for when the player is jumpscared by the Pineapple Toppin Monster. 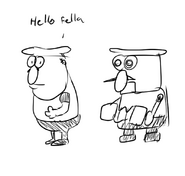 Concept art of Peshino playing music while hiding from a Mushroom Toppin Monster. 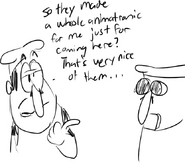 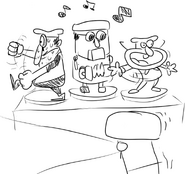 Art of Peppino and Noise trying to act like animatronics to hide from a Kids Party monster.

Sprite of Peshino (Known as Animatronic Peppino at the time) when he was a transformation.