What's on the Kid's Menu?

Kids' Party is the twenty-fourth level in Pizza Tower, and the fourth level of the Horror Passage.

It's a child-oriented pizza restaurant with dark monsters lurking throughout. 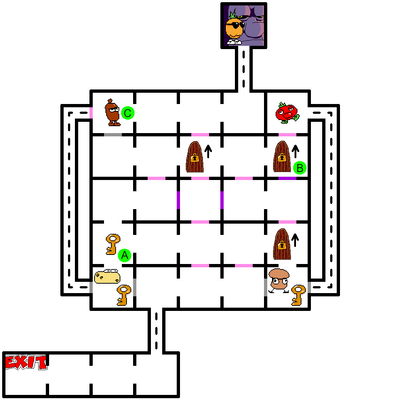 A more detailed version of the minimap is provided here. The center room is the Stage room, found on the third floor. It links to both the fourth floor and the second floor, and to two other rooms on the third floor in Pizza Time. This is the only room in the entire level where the second background is used.

Point of Interest C: The Sausage and Tomato Toppins can only be collected before Pizza Time. In order to collect either one, the player must take a one-way trip from the top to the bottom of the map using a Pizza Box. The Sausage Toppin's room in particular can be entered during Pizza Time, but the player can only take a one-way Pizza Box to the next room below like the one in Point of Interest B.

Background #1 A hallway with multiple posters of the pizzaboy pizza place.

Background #2 A stage room containing most of the Toppin Monsters and a dancing Pizza Boy.

Background #3 A dark, creepy backroom with a bunch of comically unsafe products.