"Gustavo is Completely Lost... Nobody has seen him since he crawled into the Pizza Dungeon."
— Toppinbot.

Gustavo is an NPC in Pizza Tower.

He first appears in his pizzeria in Gnome Forest, where he makes pizzas for the player to deliver to various gnomes throughout the level. The player is rewarded with a Toppin for each successful pizza delivery. His house is located in Freezer, in the room containing Pillar John.

Gustavo is a gnome person with beady eyes, a big nose, brown hair, and a brown moustache. He originally wore a white shirt, however he now wears a brown shirt and a white apron. He also wears a chef's hat, brown pants and shoes. He is generally shown to be a nice person who likes to help others, but he has also been shown to get angry at times. In Pizza Tower Guy's words, "Gustavo is super friendly, but don't disappoint him, he'll get back at you."

For example, upon seeing that Peppino failed to deliver a pizza that he gave to him, he will lunge at him in rage and strangle him to get enough points from him to make a new pizza.

Gustavo is currently planned to be a playable character exclusive to Gnome Forest, where he mounts and rides a stupid rat named Brick. The plan for it is currently to be a timed segment, where Peppino gets trapped after he finished delivering all pizzas and Gustavo must save him. This is also planned to be added to the Level Editor.

Gustavo was planned to appear in a unfinished comic featuring him and Peppino in the desert, where the two would've been antagonized by Mr.Incognito.

Gustavo making a pizza for Peppino to deliver.

Gustavo showing the pizza after making it.

Gustavo pointing at Peppino after taking the pizza.

Gustavo screaming after Peppino fails to deliver a pizza.

Gustavo pummeling Peppino when he fails to deliver a pizza.

A wooden table with tomato, knife and mushroom on it.

A purple phone on a table.

Gustavo's pizzaria building, made out of wood, with "Gustavo Pizza" text on top, his face near it, and a pan on the wall.

The first sprite of Gustavo made for Pizza Tower, picturing him talking.

A full turnaround of Gustavo's sprite.

Joke sprite of Gustavo being decapitated.

Gustavo with a cast supporting his head.

Gustavo coming out of a present, seen during The Noise boss fight in Strongcold.

Gustavo within a present, seen during The Noise boss fight in Strongcold.

Gustavo going back inside the box, seen during The Noise boss fight in Strongcold.

Gustavo after being hit, seen when accidentally hit during The Noise boss fight in Strongcold.

Gustavo in a sleigh with Peppino's other allies.

Animations made for Pizza Crawler.

Slightly later version of Pizza Crawler, in which they ditched the "turn-based" aspect.

Toppinbot's Description of Gustavo on the Pizza Tower Discord. 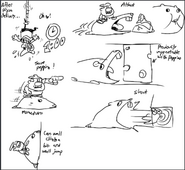