Fake Peppino is an unused enemy in Pizza Tower.

Fake Peppino is an unknown being with a close resemblance to Peppino. He's much taller than Peppino with his elongated skinny legs. His head features Peppino's long nose, black hair and short black moustache with the unsettling additions of a loose eye and a permanent smile. He also, much like Peppino, wears a white apron over a black T-shirt, black pants and a white chef's hat.

It's unknown what exactly Fake Peppino is, though a hint may lie in his tongue, which is an odd yellow colour. This has lead to the theory of Fake Peppino possibly being a cheese monster inside a suit, most likely some sort of Cheeseslime as seen with the Cardboard Tank, though this has not been confirmed in any way. Officially, Fake Peppino's origins are a mystery.

Fake Peppino's moveset is inspired directly from the real Peppino's. He will chase and try to grab Peppino to strike them with his toxic tongue. He always chases after Peppino and will follow him into any rooms he go into, so there's no way to hide from him.

As Fake Peppino isn't properly implemented yet, other aspects of his behaviour are not finalized, however it's currently planned to have Fake Peppino to be a rare appearance that possibly replaces Pizzaface during Pizza Time.

Fake Peppino was originally planned to come out during Pizza Time, but where exactly is unknown. In the GOLF demo, however, Fake Peppino can be summoned to the player's location upon pressing F9.

The effects of his tongue vary among his current available appearances. In the GOLF demo, his tongue simply damages Peppino, while in subsequent builds, if hacked in, his tongue would damage Peppino before properly killing them, killing him instantaniously in some cases. Not to mention, if loaded into the Western Build Patreon Demos, he could close and crash the game if on a successful grab.

Fake Peppino landing after a jump.

Fake Peppino asking for money, as seen in Strongcold. 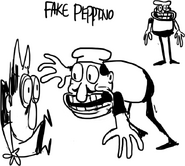 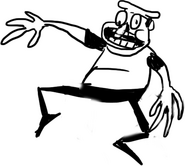 Concept art with Fake Peppino on the ceiling. 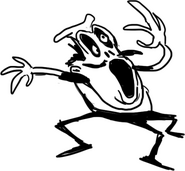 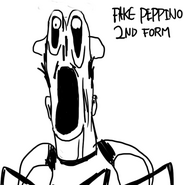 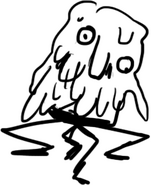