This level takes place at the entrance of the tower, which also features a jungle and a city, and many Pillar John-like creatures. 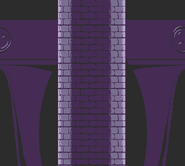 Background decoration 3. A long squished John with a bored look.

Background decoration 7. A round spherical John.

Background decoration 10. Some purple banana pizzas, a reference that was used for the base of Swedish Monkey.
Add a photo to this gallery
Retrieved from "https://pizzatower.fandom.com/wiki/Entrance?oldid=12867"
Community content is available under CC-BY-SA unless otherwise noted.