This build was made for an event in the Pizza Tower Discord server. The only level featured was a very early version of what would later become Oregano Desert. When the player found themselves in an empty room with pictures of Baby Grinch at the end of the level, they had to post a screenshot and send it to PTG. The first one to do so got access to Patreon demos for free.

In the level featured here, Pizza Time is immediately triggered. The player must go through the whole level in the time limit. 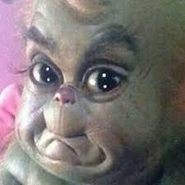 A picture of Grinch Baby. Used on final screen.

An image from a gif "Have I truly become a monster?" from PilotRedSun's "Grinch's Ultimatum" video. Used as decoration that covers some objects.

A object in the race build called "gamerestart_cube" with a sprite called "spr_ball"
Community content is available under CC-BY-SA unless otherwise noted.
Advertisement